This is a useful backgrounder.  I think you’ll enjoy it as an explainer.  And in line with the material I sent you yesterday, there is one important little nugget in this one right at the end.  Almost at the conclusion of this article the archeologist who’s work it’s based on says that he had recently found an administrative center assigned to Solomon’s time.  The importance of this is that if the United Kingdom was really still just a tribal network and not a kingdom, it would have not needed architecture of this level of complexity.  So it’s evidence that, yes, there was a kingdom-level government functioning during the time assigned to Solomon.
And when you consider it there is a pretty clear demarcation in our thinking about the United Kingdom.  There is no archeological evidence of a sophisticated kingdom under Saul.  He’s referenced in the Bible, but not in archeology.  Why?  B/c if I’m right about him he was still leading an enlarged (and continued to work at enlarging) tribal society that did not yet need and was not yet building monumental works or the buildings needed to house a unified monarchy.  Saul was building the foundations for that level of social unity, but it had not yet arrived in his time.  And when it did arrive with David, it was still sketchy enough to not leave the big stuff that we know about from established kingdoms like in Egypt, Damascus, Assyria and so on where they had well established kingdoms and left us extensive hard evidence of what was going on in their worlds.

Sent from my iPad 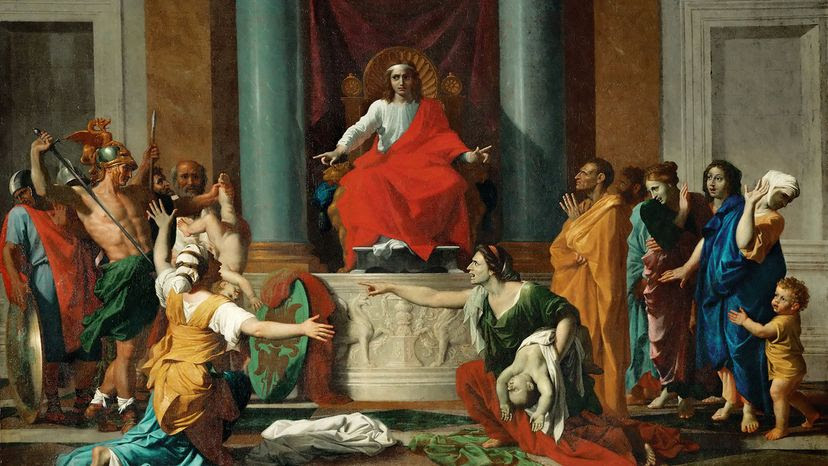 ‘The Judgment Of Solomon’ painting depicts Solomon deciding which of two women is the real mother of the baby. Fine Art Images/Heritage Images/Getty Images

In the Bible, the reign of King Solomon coincides with the height of ancient Israelite wealth, power and divine authority. King Solomon, according to the book of 1 Kings, “was greater in riches and wisdom than all the other kings of the earth.” His fame attracted courtly visitors like the magnificent Queen of Sheba, and his amorous appetite required no less than 700 wives and 300 concubines.

Chosen and blessed by God, Solomon built the First Temple in Jerusalem to house the mythic Ark of the Covenant, and he commanded an army led by 1,400 chariots that conquered kingdoms as far north as the Euphrates River stretching down to the Negev Desert. 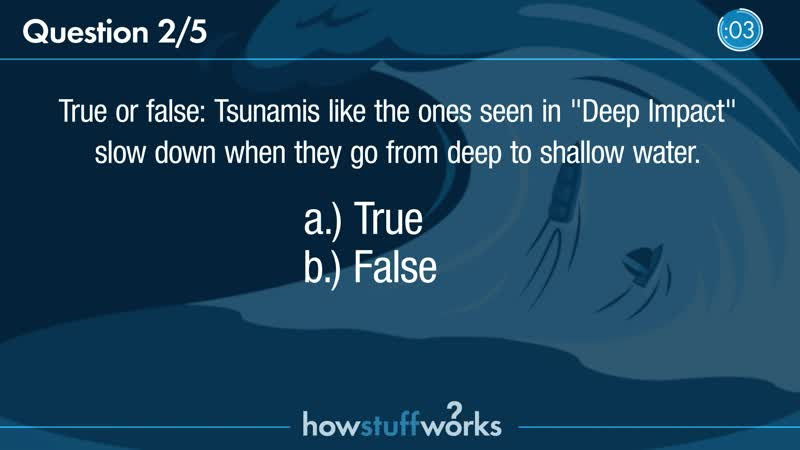 Yet after more than a century of digging and searching, archeologists and historians have yet to uncover a single stone belonging to the First Temple or even a fleeting textual reference to the great King Solomon outside of the Bible.

In fact, some scholars believe that Solomon and his father David, another larger-than-life biblical figure, may not have been world-famous, all-powerful kings as much as locally renowned tribal chieftains with a good PR department.

To sort out who was the “real” King Solomon, we spoke with Steven Ortiz, director of the Lanier Center for Archaeology at Lipscomb University in Nashville, who has led archeological digs in Israel, including sites that date to the time of David and Solomon, roughly 1,000 B.C.E.

The Golden Age of Israel

King David was the first to rule what’s known as the United Monarchy, a single kingdom that encompassed all of ancient Israel. David had many wives and many sons, but the Bible tells us that he chose Solomon, the son of his beloved Bathsheba, to take the throne after his death.

“Solomon, in the Bible, was the pinnacle of the Israelite kings,” says Ortiz. “He inherited the United Monarchy from David, but he took it further. You have Solomon and all of his wives, Solomon’s gold, Solomon’s Temple. His reign is larger than life, at least in the biblical account.”

The Bible describes the grandeur of the First Temple and the luxury of Solomon’s palaces, where everything was made of gold, “because silver was considered of little value in Solomon’s days,” according to 1 Kings 10:21. As word of Solomon’s great wisdom spread far and wide, “the whole world sought audience with Solomon to hear the wisdom God had put in his heart.”

The most famous foreign dignitary was the impressive Queen of Sheba (possibly from Ethiopia or Yemen), who led a “great caravan” of camels carrying “spices, large quantities of gold and precious stones,” quizzed King Solomon on his knowledge with “hard questions” and was “overwhelmed” by all she saw and heard, according to the Bible. She exclaims in 1 Kings 10, “In wisdom and wealth you have far exceeded the report I heard. How happy your people must be!” 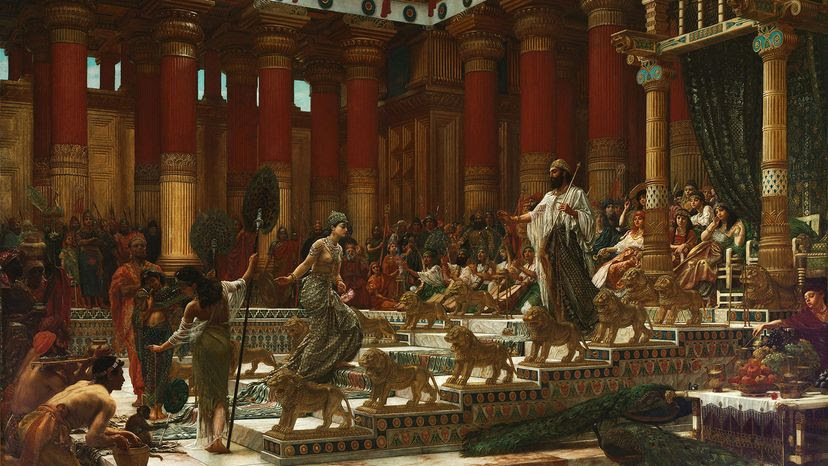 The Queen of Sheba pays a visit to King Solomon. In addition to his wisdom, he was known for his writings. Three books in the Bible are said to have been written by him.

Then there’s the legendary story known as “Solomon and the Two Women” or “Solomon’s Judgment,” told in 1 Kings 3. In this tale, two prostitutes come before Solomon, each claiming that an infant boy is their son. Solomon calmly commands his guard to take a sword and divide the child in two, giving half to each woman. One of the women cries out and says to give the baby to the other women if it means sparing the boy’s life.

“Give the living baby to the first woman. Do not kill him; she is his mother,” rules Solomon, for only the true mother would put her baby’s life above her own happiness.

Differing Accounts of Solomon in the Bible

Solomon appears in three books of the Hebrew Bible — 2 Samuel, 1 Kings and 2 Chronicles — and the details of his life vary in different retellings. The earlier books, for example, are more likely to include some of the “less shiny” aspects of Solomon’s story, like his usurpation of the throne from his brothers, and his sinful taste for pagan women.

“King Solomon… loved many foreign women… Moabites, Ammonites, Edomites, Sidonians and Hittites,” the Bible relates in 1 Kings 11. “They were from nations about which the Lord had told the Israelites, ‘You must not intermarry with them, because they will surely turn your hearts after their gods.’ … As Solomon grew old, his wives turned his heart after other gods, and his heart was not fully devoted to the Lord his God, as the heart of David his father had been.”

This is given as the reason for Solomon’s downfall. As a new king, Solomon had prayed for wisdom to rule well. God was impressed that he didn’t ask for personal gain and in addition to granting him wisdom, blessed him with riches too. But because he started worshipping other gods, God took away his protection and raised up enemies that the king had to fight. God also told Solomon that most of his kingdom would be torn away from his son after Solomon’s death. 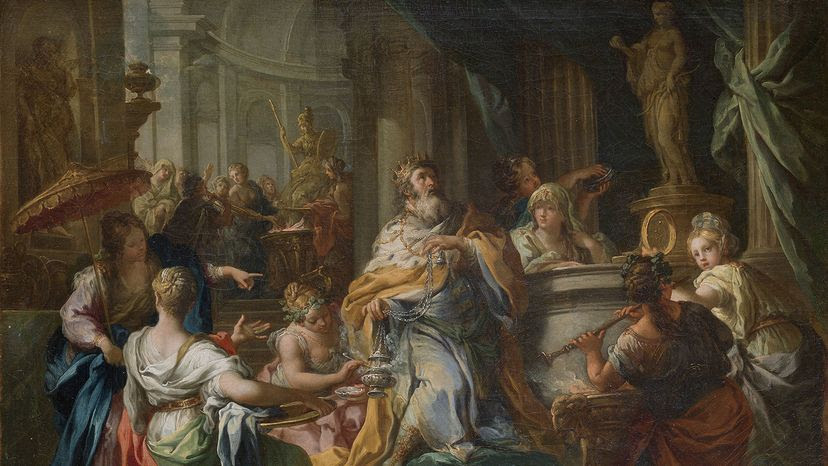 This painting titled ‘The Idolatry of King Solomon’ shows Solomon worshipping false gods, in this case the Roman goddesses Minerva and Diana.

While criticisms like these appear in the accounts of Solomon in 2 Samuel and 1 Kings, nothing remotely negative is included in 2 Chronicles, which reads like a “greatest hits.” It’s generally agreed among scholars that Chronicles was written between 400 and 300 B.C.E. after the Babylonian Exile, when the Jews had returned to Jerusalem and built the Second Temple, while Samuel and Kings were written during the Exile (around 550 B.C.E.)

Later Christian readers latched onto the exaggerated accounts of David and Solomon’s greatness in Chronicles because Jesus is directly descended from the House of David, according to his genealogy in the New Testament book of Matthew. The majesty of David and Solomon’s reign was seen as a precursor of the millennium, when Jesus would return and God’s kingdom would once again be established on earth.

Scholars are divided on the historicity of David and Solomon and the true size of their United Monarchy. While there are no extra-biblical references to Solomon in texts from neighboring kingdoms like the Egyptians — despite the Bible’s claim that Solomon married one of the pharaoh’s daughters — there is one intriguing piece of evidence pointing to the existence of the United Monarchy.

In 1993, Ortiz says, archeologists in northern Israel unearthed a stone tablet inscribed in Aramaic that told of an Aramean victory over the kings of Israel, referred to as the “House of David.”

“It doesn’t date to the time of David, but a century later during the wars with the Arameans,” says Ortiz, explaining that Israel was ruled at that time by lesser-known kings like Omri and Ahab. “The implication is, when the Arameans wanted to brag about conquering Israel, they picked a bigger name than Omri or Ahab, so they called it the ‘House of David.'”

But still, one fragment of a tablet isn’t substantial proof that the United Monarchy was a big deal in the ancient world.

An archaeologist named Israel Finkelstein has promoted a controversial theory that ancient Israel was still a dusty backwater in 1,000 B.C.E. when David and Solomon would have lived. Instead of ruling a vast and powerful kingdom, David and Solomon were most likely important chieftains of local Bedouin tribes. Under Finklestein’s theory, the real establishment of an urban Israelite kingdom didn’t come until the ninth century B.C.E. and coincided with the rule of Omri.

The hyperbolic talk in the Bible, Finkelstein wrote, according to the New Yorker, was a product of Judean authors who wanted to play up the importance of their kingdom in its ongoing rivalry with the northern Kingdom of Israel. 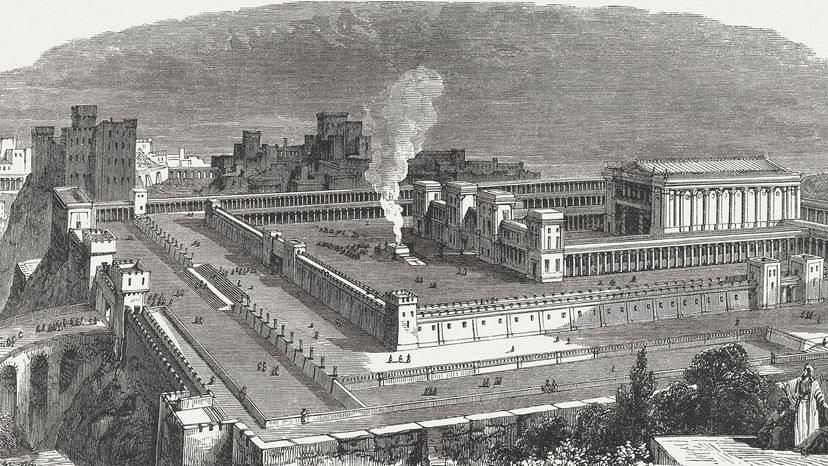 An artist’s impression of Solomon’s Temple in Jerusalem. Labor conscription, tributes from foreign countries and taxation all contributed to his wealth, according to the Bible.

Ortiz disagrees. For a decade, he led a dig at Tel Gezer, a village in the foothills west of Jerusalem, where his team uncovered evidence of an administrative complex dating from 1,000 B.C.E. Ortiz contends that urbanization and kingdom-building was already happening during David and Solomon’s time.

Ortiz isn’t buying the chieftain theory, but does that mean that he thinks the stories of Solomon’s fabulous wealth and power are all true?

“The stories and traditions associated with David and Solomon grew and took on a life of their own,” says Ortiz. “But I think their United Monarchy would have been significant for the 10th century. In the context of the biblical authors, at least, this was a big kingdom.”

“Elijah was a man with passions like ours.” James 5.17